My Journey to 50km. By Peta Davies

Well, I guess I should start with why I entered the North Face 50k having never run more than 22km.

I had done a few trail races including the Glow worm Tunnel half marathon and loved them and had experienced true moments of utter peace, so who doesn’t want more of that right? When one of the other RMA mums asked me if I was interested I thought it sounded awesome and I couldn’t shake the feeling I was meant to do this.

I mistakenly assumed that may have something to do with someone else. I was wrong, this was every bit about me and I was unprepared for the emotional stuff that came up during training, very buried childhood issues that left me questioning who I was if I let go of them. Getting through that to be at the start line was hard. One of my biggest fears is inconveniencing people, no really! Worrying that I would hold the other girls up on the day was a lot for me to get over but when race day came I felt at peace with this, all you can do is your best. 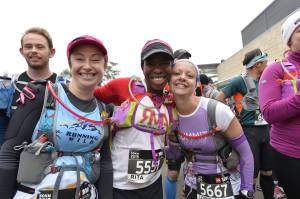 I had trained somewhat with my pack on but not with the full weight of the food, and now that I look back I did have issues on the times I trained with the heavier pack but put it down to other things. As soon as I put that pack on my back and strapped it up I felt like I was having trouble breathing. I do suspect I have a bit of exercise induced asthma but in all honesty its much more complex than that, unfortunately I don’t think you can spend the first 17 years of your life in a constant state of stress and anxiety and not be left with some physical issues.

The start line atmosphere for this race was awesome!! Definitely the best I have experienced. I was really lucky to be running with two amazing women I have met through RMA, Lorelai Burns and Rita Hall, they kept me going for the first 25km and I wouldn’t have made it that far without them.

I started feeling sick pretty early, today was the day my stomach said I’m not taking any more of those gels man! That plus I really struggled breathing up the stairs with the weight on my back, it was leaving me so fatigued I found it difficult to run much of the runnable sections and by the time we got to about 25km I was busting for a toilet and not able to keep up. 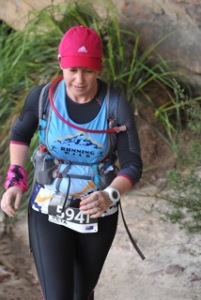 I told the other girls to go on to the 28km checkpoint and I’d see them there. I had made a deal with myself that if I got to the 28km checkpoint I would be ok because I knew I had some downhill after that for at least a bit, but when I got there and stopped I was dizzy and the girls said I should get checked which I did. I told them to go ahead, I didn’t want to hold them up any longer and knew I probably wouldn’t be able to continue keeping up with them.

The staff checked me and everything was ok, so I tried to pick the white bread out of a fruit bun (thinking this would clog things up, if you know what I mean) and refilled my bladder not knowing what to do. I had been through so much to even get to this race I thought I just have to try, I’ll just put my music on and keep trying. I had to run down kedumba with my butt cheeks clenched! Anyone who’s run down there will know thats not fun! I was very slow on the ups but that was a welcome relief from the butt clenching! LOL. It was like a comedy of errors as I ran past the same people who then swiftly overtook me walking the ups, but I just had to make up time where I knew I could. By now my watch was consistently ripping me off with km’s so I really didn’t know how far it was, the 41km aid station seemed to take forever. When I stopped there I did not feel good, the view started moving away from me, which I think is low blood sugar. I had some chips and I did feel better, the staff/volunteers here where so nice. It was really hard to leave there, even though there was only 9km to go I had a fair idea of how long that was going to take me and theres no medical assistance after that and really no way out except on your own. But I thought I just have to try, theres a long cut off, I knew I could still make it well before that and I had a husband and son waiting for me at the finish line and I wanted to make them proud.

So with 5 lolly snakes a lovely young man at the aid station put in a bag for me off I went. Thank God for those snakes! I rationed them and they gave me the energy to get to the stairs. The last roughly 5km were by now pitch dark and they were very tough. I knew enough to know I was very fatigued and one wrong foot in that section would not end well. I had lots of other runners pass me after the 41km aid station and they were extremely kind, they asked if I was ok and offered words of encouragement. At one point I wanted to go, stop being so nice to me or I won’t make it out of here! But really I was extremely grateful and as my watch was all but useless now it just felt like being on your own in the dark with nothing but faith that eventually you will see the light.

Finally the last brutal stair climb arrived, I was fine with that because I knew to just focus on each stair and not look up and it would be over. My son was waiting at the top of the stairs for me and it was really special to run across the line with him and really nice to have so many people clap and cheer you home, that was very special, I finished in 11hours and 49 minutes. Would I do this run again? No, I wouldn’t do another run with so much weight in a pack, I found it totally suffocating and I didn’t love that there was so many stairs that I felt like I could’t put my head up and enjoy the view.

In the end I felt like it was a day that in lots of ways represents what happens in life. I don’t believe you are never alone, you can be offered support but sooner or later no matter who you are or where you come from you will find yourself sitting on your own and you can choose to sit where its seems easier or you GET UP and you keep going, I know there will be many of you that have felt at times like you are in the dark and all you can do is keep putting one foot in front of the other in the hope that you will soon reach the light and when you get there it will be worth it. In the days since I have felt I suppose a bit ripped off that I never felt any of those peaceful and free moments I was hoping for but I experienced many of these in training.

I met some really amazing women and got to spent time with some of my dearest friends and all of them taught me things. After reading Nicole’s article on love your body, I looked at myself in the mirror this morning and thought Damn my companion pony legs did me well!  I have no events planned for the immediate future, this confirmed to me that I now want to work on my breathing and how I teach myself to relax when breathing hard, not see this as a stress response. I suspect this won’t be easy but I feel like I just have to try……